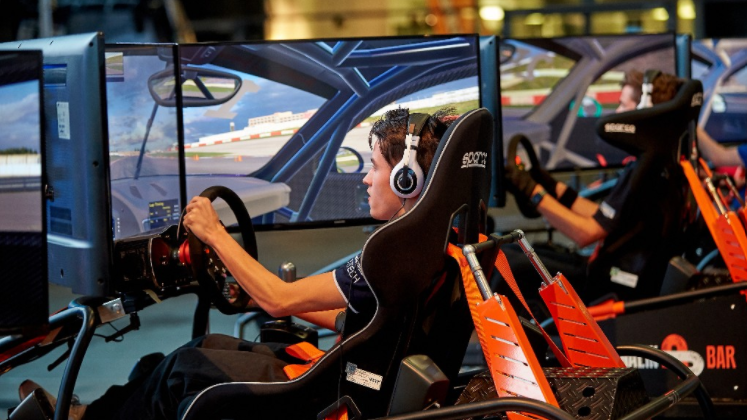 Simracing as an esport was already well on its way to becoming mainstream, but just like a lot of other online activities, simracing got a massive boost in growth due to the global pandemic. With real-life Formula 1 drivers like Max Verstappen, Lando Norris and Charles Leclerc joining in to compete, viewership on Twitch (and sometimes even national television) have reached new all-time highs.

So why the large spike in growth now you might ask? Well, it used to be only a handful of people who had the possibility and ability to step behind the wheel of a race car. For the ordinary race enthusiast it was previously thought impossible that they could compete with the best drivers by racing wheel to wheel and pushing themselves and their cars to the limit. This has changed. Now, almost everyone can join the competition, from console players with a gamepad, to simulators with proper racing gear and equipment prices far exceeding the thousands of euros.

And although these simulators may look silly at first, one thing is for certain, ‘simracing’ has arrived in the motorsport and is bringing all the benefits that digital simulations can offer to the masses. In this blog I will tell you more about what simracing is, why it is booming and what the future holds for this particular eSport.

Simply said, it is driving a simulated car around a virtual track though the use of a computer and input devices (e.g. a gamepad or a full steering wheel and pedal set). This is quite a broad definition, and this is because there are many ways of being part of the simracing world. For instance you could drive the game Gran Turismo Sport casually on a TV with a gamepad or alternatively have a full simulator at home with all the bells and whistles, playing the most realistic simulators out there with Virtual Reality glasses and everything else in order to maximize the immersion in this virtual world. Both of these methods are perfectly feasible, but they are both very different ways of playing, also with different price tags attached. However, the main goal stays the same: to go as fast as possible around the track and fight for position with your fellow racers to reach the ultimate goal, to cross the finish line first.

Why is it booming now?

Normally, real world racing drivers (apart from a few exceptions) are too busy with their own schedules to prepare for race day. However, during the COVID-19 pandemic, almost all of the real world events came to a halt. Some of these real world drivers took the opportunity and dove head first into the simracing world, and introducing their following to platforms like Twitch and Youtube for live simracing events.
A great example of this was one of the largest motorsports events of the year: the ‘24 Hours of Le Mans’. However, this time it was fully digital, racing in the game rFactor 2. This was no ordinary simrace, because around 200 famous drivers supported by real manufacturers from the likes of Ferrari & Porsche were invited, from Formula 1 and GT drivers (Max Verstappen, Charles Leclerc etc.) to large influencers in the simracing world (Jimmy Broadbent & Nicki Thiim). There also were professional commentators broadcasting resulting in an audience of 14 million views.

So, what does the future hold?

In addition, better research on drivers, cars and how they interact with each other with be very important in order for this sport to take the next step to being a full-blown professional sport. Just like in real sports, research is done on the behaviour and variables influencing the performance of esporters. The results of this research can then be used to immediately improve how the drivers perform.

With the help of a dashboard full of data, showing all the relevant information for a driver to improve, we can quickly see where the mistakes are made and where there is room for improvement. This dashboard will at first just feature the sector times and general scores like how consistent a driver is. When this basis is set up properly we can dive into more detailed analysis, for example if a driver is overdriving the car too much or stays under the limit in certain parts of the track.

All of this analysis will be used to help our drivers perform better on track and score points more consistently. We as Esports Team Twente see the importance of improving performance through research and data analysis, especially in such a competitive environment like the simracing space and we are going to apply these methods to our own drivers as soon as we are able to.