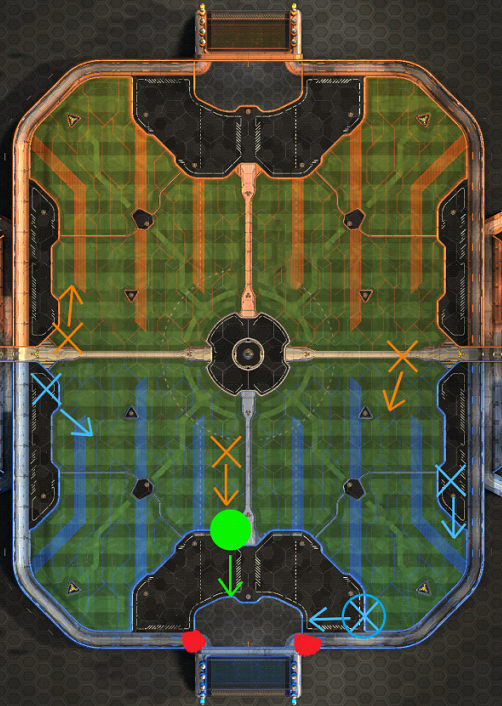 Decision support systems (DSS) are widely used within sports to make decisions about team formations and tactics. Within esports, however, there has only been done limited research on this topic even though the nature of esports shows great potential for the use of DSS. This summary will focus on the possibilities of DSS in the esports title Rocket League. For the paper, interviews with experts were conducted. These interviews provided information about what decisions teams make and what information they base these decisions on. Furthermore, these interviews gave insights into how information can be extracted from the game and what support can actually be delivered.

There are definitively possibilities for decision support systems in Rocket League which can help players and teams improve. By interviewing a coach and multiple players, player insights were obtained into what kind of decisions are made during a match and what information they use for this. In preparation for matches, the coach and players watch replays and try to find the mistakes the team makes. The most important decisions, as mentioned by the participants, are positional decisions and when to go for the ball. The most important aspect is the mistakes in these decisions, as this is where support can be given. These mistakes are identified by looking at the positioning of the team in replays when goals are scored against them or when their overall position during the match could be better.

Next to those decisions, there are also decisions made when deciding upon a strategy. This is mostly dependent on the team composition. The team composition is based on the capabilities of each player, which can be seen in the statistics available to the coach and players. Next, insights were gained into the information that can be retrieved from the game. By interviewing an analyst, insight was gained into how replay files can be used to analyze positional mistakes and challenges. The positional mistakes can be analyzed by using heatmaps, which can be used to identify positions on the map which give a player a better chance at saving the ball, or which show where a player could have positioned on offence to avoid the ball from going over his head. It turned out it was not possible to gather insights into when to go for a ball, but instead, challenges could be analyzed to improve a player’s ability to get a favorable outcome when they do decide to go for the ball. Afterwards, the information from both interviews was combined to develop a conceptual framework.

This framework consists of three parts. First, a statistical overview of team and player statistics. This can be used to see what a player or the team needs to work on, or what strengths of certain players are to develop a strategy. Second, support in positional mistakes can be given. By showing possible improvements to the players when they were unable to save a shot, the players can improve their positioning for the next match. The final part of the framework is about challenges. This part of the system would give insights into what causes a player to lose or win a challenge. This can then be used to replicate won challenges and improve the player’s way of challenging the ball overall. Lastly, this conceptual framework was evaluated.

During the evaluation, each part of the framework was discussed, and improvements and concerns were mentioned by the participants which resulted in some must have functionalities and some nice-to-have features. The must-have features included the proposed statistics in the statistical overview and the proposed feature of showing 7 positional improvements. However, for this last feature, there were some concerns regarding the accuracy of such a system.

Furthermore, a must-have feature would be to give insight into why the ball goes the direction it goes after a challenge and how certain aspects, like the rotation of the car or how high the ball is hit, influence this direction of the ball, instead of looking at what wins or loses a challenge. This is due to the fact that a win for one person can be considered a loss for another, as it depends on the intention behind the challenge. Next, there were some extra nice-to-have features on top of the proposed features. These included, extra statistics in the statistical overview and next to positional mistakes on the ground, the participants would like to get insights into backboard positioning.

Lastly, the participants also gave some nice to-have functionalities outside of the proposed functionalities. These included the effectiveness of touches overall and the ability to put their communications over a replay file to see what is missing in their communication. The participants of the evaluation definitively saw potential in a system such as explained in the framework, as this could reduce the time, they need to spend analyzing replays by a great portion. They believed it would be very useful to have and they would definitively try it out if they got the chance.

You can read the paper by sending an email to info@esportsteamtwente.nl.